Recognizing that science and human exploration are mutually enabling, NASA created the Solar System Exploration Research Virtual Institute (SSERVI) to address basic and applied scientific questions fundamental to understanding the Moon, Near Earth Asteroids, the Martian moons Phobos and Deimos, and the near space environments of these target bodies. As a virtual institute, SSERVI funds investigators at a broad range of domestic institutions, bringing them together along with international partners via virtual technology to enable new scientific efforts.

SSERVI fosters collaborations within and among competitively selected domestic teams, the broader exploration science community, and multiple international partners in order to: 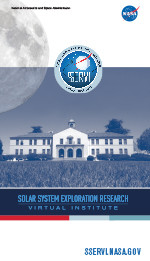 The SSERVI central office is located at NASA Ames Research Center, in the heart of Silicon Valley. The staff at the SSERVI central office forms the organizational and collaborative hub for the domestic and international teams. As noted above, SSERVI Central administers funding for the domestic teams, provides IT connections for the teams and community activities, develops the community through the annual Exploration Science Forum, Workshops Without Walls, Director’s Seminars and other activities, and manages related efforts such as the Solar System Treks. The SSERVI teams are supported through multiple year cooperative agreements with NASA; each team is comprised of a number of elements accomplished through multiple institutions, all managed by a Principal Investigator. International partners, selected through proposals approved by NASA headquarters, collaborate on a wide variety of projects and activities.

Ames is known for its innovative and cost-savings approaches to space exploration, and rapid advances in technology happen every day in Silicon Valley. Ames Research Center is home to each of the NASA virtual institute central offices (the NASA Astrobiology Institute (NAI; 1998-present), the NASA Lunar Science Institute (NLSI, 2008-13), SSERVI (2013-present; follow-on to NLSI), and the Small Spacecraft Systems Virtual Institute (S3VI, 2016-present). The National Research Council has strongly endorsed the virtual institute model as an effective and unique business model for forging strong scientific collaborations.

Virtual Institutes address complex, multi-faceted questions, using a Cooperative Agreement Notice (CAN) as the mechanism through which teams are funded. A CAN leverages NASA’s investment through in-kind contributions from a Principal Investigator’s institution including facilities, faculty hires, non-NASA funded labor etc., as well as offering flexibility in direction as research projects evolve. Teams are funded for five years, providing stability for students (our future workforce), with CANs issued every 2-3 years to allow overlap between generations of institute teams. This timescale also allows quick response to any change in NASA direction. Each SSERVI CAN is developed jointly by NASA Headquarters and the SSERVI Central Office.

The SSERVI central office is responsible for stimulating science throughout the entire community, and leveraging additional research by connecting others to the Institutes’ currently funded teams. Most notably, the central office organizes and sponsors the annual Exploration Science Forum, held at Moffett Field, California, which brings together several hundred researchers to discuss topics ranging from modeling to mission science. Additionally, SSERVI works closely with both LEAG and SBAG, serving on their respective executive boards to involve the broad community.

The Director’s Seminar Series brings the community together via videoconferences that are archived for future reference. The Focus Groups mobilize expertise across the community on relevant topics developed at a grass roots level. The Institute’s Workshops Without Walls, held in virtual space, provides travel-free conferences with recognized leaders on topics of current interest.

SSERVI-funded publications can be found in the library or through individual team websites. Many papers are co-authored across teams, which is indicative of the effectiveness of a virtual institute in bringing together well-formed teams that find important overlaps at the intersections of their research interests. Interdisciplinary and inter-team research often results in unexpected discoveries. A special focus on the importance of public engagement can be found in the well-developed activities of each team, including several over-arching programs led by the central office.